I got a petition in my email today saying “For 35 years Yoplait cups have been killing wildlife” and of course, I read it. Part of me wanted to sign it, but then I decided to write about it instead. Why? Because it’s not the containers that are killing the animals, it’s people and litter.

I can’t count the number of petitions and videos that I’ve seen about animals dying from getting caught in containers and bottle holders or from ingesting trash. The thing is, yes, the containers and holders are poorly designed and can hurt animals, but the bigger problem is that people are creating too much trash, disposing of it improperly and littering. People are a bigger problem than the packages.

Even right outside my own home I see tons of trash on the roadside. All up and down the road I live on there is garbage on the embankments and in the gutters. Personally, we recycle, cut bottle holders and do other things to make our trash is safe and properly contained, but a lot of people don’t. A lot of people put loose trash in the bins, leave their recycling loose and even worse, throw trash down as they’re walking or fling it out of car windows.

Animals wouldn’t die from these things if people would be more careful. You could redesign every package in the world and it wouldn’t matter. Unless every single thing were made biodegradable so that it would break down quickly, nothing would help for very long. There are too many people creating too much trash and not dealing with it properly.

Take a look at this video. And fair warning, unless you are a heartless POS, this will make you cry and become disgusted with humanity.

Here’s another one about the same place, but it shows even more of what’s happening. 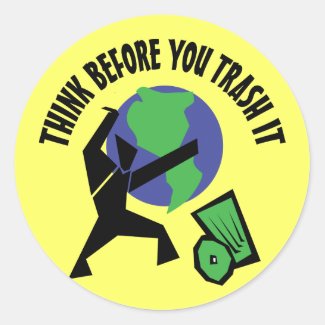 We are using and discarding so much shit that it’s destroying the planet and killing off the animals. I think if we wanted to petition companies for anything, it should be to stop making and using plastic. We should also be coming up with better and more responsible ways to deal with trash. The Earth is going to be ruined within just a generation or two at this rate, and it’s not like we have anywhere else to go. We only have this one planet, so we need to take care of it and stop destroying it.