Why Do People Hate Intelligence So Much? - Briana Blair - BrianaDragon Creations

Why Do People Hate Intelligence So Much? I mentioned in my previous post that I got attacked repeatedly in a Facebook group. One of the reasons was because I value intelligence and good communication, and they went crazy when I suggested that those things were important. It’s a pretty common feeling, and I just can’t get my head around it.

Now, I’ve got no problem with people being informal. You don’t need to make every blog post or status look like a college term paper to be a good or valuable person. I also fully understand that it’s totally human and normal to make mistakes and have typos. I just think that we should strive to be our best, and what we put out into the world matters. Not only does it express who we are, it shapes how other people understand and communicate, whether you want to believe that or not.

I’ve advocated for intelligence and better communication a lot over the years. Ten years ago, people agreed with me on a regular basis. They lamented the failing communication skills on the internet and talked about how they’d proof their own statuses and articles before hitting post. People agreed that it mattered, and that we should try to be our best. As the years passed, the reaction changed, and not in a good way.

Now when I bring up this topic, I get a sting of angry, hateful responses. People make a string of excuses, calling me insensitive for not realizing that someone might have a learning disability or dyslexia or not have English as their first language. I understand that those things exist, and you get leeway for that, but that doesn’t account for most of the people online. Are you trying to say that every gown-ass, white, American person on the internet has a disability and is originally from another country? No way. A fraction, maybe, but most people are just lazy.

I think that’s what pisses people off. It’s the implication that they’re lazy and that they could do better if they wanted to. The simple fact is, people choose to use slang, spell things wrong, not proofread, allow auto-correct and auto-fill to do the work for them and never check it before posting. Apparently, I’m judgmental, elitist, and evil for thinking people should use their brains, but the people who don’t use them are perfectly justified in choosing to be less than their best.

People will say “It doesn’t matter, because it’s not hurting anybody!” I call bullshit. It is hurting people. It may not be doing physical harm, but every misspelling, every bit of laziness and stupidity, perpetuates more like it. The more people are exposed to errors, the more likely they are to repeat them, because it becomes ingrained. Hell, even I have to stop and think about the spelling of some words now, because I’ve seen them done wrong so often, and I’ve got an IQ of 148! If it gets hard for me, how do you think it affects the average person? (And America’s collective IQ has been dropping for 50 years) there absolutely is harm being done when people choose to be lazy and stupid.

Spelling and grammar are just one part of the problem, too. Intelligence is being shunned nation-wide. If you’re smart, you’re a freak. No one will like you, and they’ll try to make you feel like a monster if you won’t dumb yourself down. Rather than educate themselves and become better, they try to tear down anyone who’s smarter than they are. And this is how we get people who dip their balls in soy sauce and eat Tide Pods. This is why we need labels that say “Do not eat iPod” and we need labels that tell people their water is gluten free. We cater to stupidity instead of fighting it.

Let’s not even get into how low intellect and lack of critical thinking has gotten us the MAGA crew and Trump as our president. When stupidity is allowed, when money and narcissism and sensitive feelings matter more, this is what happens. Our society breaks down. It doesn’t help that stupid people breed more than smart ones, so we keep getting generation after generation of idiots.

We need to value intellect. We need to each do our best to set a good example. We don’t have to be snooty and formal, and none of us is ever perfect, but we need to try to be intelligent, well-spoken and decent. We have to encourage others to up their game and use their brains, and be ready to take the inevitable backlash from people who would rather attack us than put in the effort to be better. We have to fight for real, fact-based education in schools. (Side note: My spell check just tried to get me to change “than” in my previous sentence to “then.” This is where being smart is valuable, when the tool you think you can trust wants to make you look like an idiot.)

I know I’m likely to get attacked for this post, as I do every time I post something like this, but I’m going to keep saying it anyway. We all have a choice to be lazy or to be better. We can make excuses or we can get off our asses and try. We can get offended, or we can get on board with being more than we used to be. It’s our choice. What choice are you making? 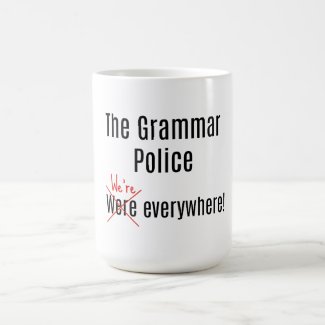