I was raised without religion, in an abusive home, and yet I’m a good person. I knew right from wrong, even when I was being taught and exposed to things that were definitely wrong. Contrary to popular belief, you don’t need a deity to have ethics or be a decent person.

I’m not positive, but the idea that you need to believe in a sky-being in order to be a good person seems to be a predominantly, if not specifically Judeo-Christian one. The folks who believe in a single sky-person, seem to believe that morality comes from that being, and can’t exist without it. I haven’t encountered that belief anywhere else. In 26 years as a Pagan, I never encountered anyone who thought that our belief in sky-beings was what made us good or bad. We all believed that it was our words and actions that determined who we were, and we could all decide right from wrong for ourselves. Satanists don’t root their morality in a sky-being, atheists don’t, Buddhists don’t either. It seems no one else thinks that being a good person depends on having faith in a sky-being.

Unfortunately, those who follow Judeo-Christian systems seem to think that anyone who doesn’t believe in their deity is a horrible person. They insist that without a book and the guidance of a mythical master, you can’t make good choices. It’s utterly ridiculous, but that doesn’t stop people from believing it. Not only do they believe it, they’re more than happy to attack others because of that belief, to the point where they may completely vilify or discredit non-believers.

If you think about it for a moment, you can see that this argument has no basis in fact. If people who don’t follow a certain religion and get their moral cues from a deity were all immoral, the world would be in a far bigger mess than it is now. There would be far more murder, rape and other crimes. Yet that isn’t the case. If you needed a sky-being to teach you how to be good, a large portion of the world’s population would be savage monsters, but we’re not. The facts show that this idea has no real basis.

Religious people will supposedly do good and avoid evil, because they fear divine punishment more than legal punishment. However, countless religious people commit immoral acts every day. Many of them even use their religion as an excuse for their immoral behavior, such as religiously motivated bigotry and hate crimes. Obviously, the rules of a sky-being don’t really keep people in line, even though they fear eternal pain and damnation. They also like to make the excuse that they’re being led into evil by the antithesis of their sky-person. (Satan, etc.) It probably helps them that they can get supposed “absolution” for their wicked acts by re-affirming their love for their deity, or confessing to a religious official.

People of other faiths, and no faith at all, don’t need a deity’s rules to do the right thing. Societal interaction teaches us what’s right and wrong. Other people correct us. Laws are in place to punish the more heinous acts. Even without all of that, day-to-day life and trial and error can teach you right from wrong, and you can develop your own moral compass. Over time, any person who interacts with other human beings is going to figure out what is objectively right or wrong.

Since there’s no proof that gods exist, it doesn’t even make sense to use them as a basis for morality. Anything supposedly said by them was written down by humans, who are fallible, and probably had their own motives for writing what they did, the way they did. How do we know that acts described in religious texts are actually moral? Which god got it right? Could they change their mind?

We can choose for ourselves. The outcomes of our actions and the reactions of others can guide us. There’s an article on Atheist Alliance International that expresses these ideas more eloquently than I can, but what it boils down to is that people can use reason and logic to come to moral decisions and determine a moral compass. Gods don’t need to be part of the picture, and can actually muddy the subject to the point of insanity. If you don’t follow a major religion, that doesn’t mean you’re immoral. How you behave toward other living beings decides that. 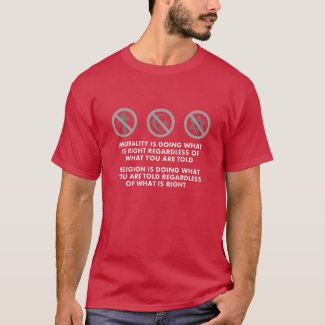