“God is in everything and he needs to get out” is a motto being spoken by more and more Americans. In a country that claims to be a place of freedom and equality, many are finding that the claims are untrue, particularly when you’re not part of the “religious majority.” God has permeated our society and government, and people aren’t standing for it anymore.

Dozens of lawsuits have been filed in the last decade alone, attempting to remove mentions of god from our money  (“in god we trust” was added in 1864), our citizen oaths,  the Pledge of Allegiance (“under god” was added in 1954), and even the presidential oath. It’s becoming very clear that the people of America don’t want god forced into their lives. Unfortunately, these cases are constantly being thrown out. The presence of these statements doesn’t (at least according to judges thus far) violate the constitution, so they let it stand, much to the dismay of an ever-growing portion of the population.

The Freedom From Religion Foundation, and other independent lawyers and individuals,  have been filing suits and attempting to aid non-religious and non Judeo-Christian people in having their rights recognized, but it’s an uphill battle that isn’t going as well as many of us would like. One small step in the right direction is that for testifying before congress, Democrats eliminated the use of the phrase “so help me god” when they regained power in the House of Representatives in 2019. Unfortunately, biased judges have been impeding progress and acting against the public’s will.

We don’t currently have much recourse against the use of god in public matters. In the courtroom, it’s possible to request a non-religious “affirmation” when being sworn in, but you have to know that it exists, have your lawyer ask the judge for it in advance, and hope the judge will allow it. It’s been suggested that these requests be made in chambers, so “the witness won’t look unduly obstreperous or morally deficient in open court.” A person can also request alternative nationalization oaths, but again, the practice is frowned upon, which is unfortunate for those who wish to be free of another religion’s deity.

An increasing number of Americans believe that secular statements and wording should be the default. Particularly regarding oaths, if someone wants to mention their deity, they should need to request to do so. It makes more sense that any wording encountered by the public be inclusive, but the religious Right, particularly Evangelicals, disagree. Unfortunately, those who want to force their belief systems on the masses, claim that using deity-oriented statements are “well-established tradition” and as such, deserve to stand. One politician even stated that removing the phrase “so help me god” would be seen as “aggressively hostile to religion.”

I think that religious believers need to understand that their way doesn’t belong in the public arena. We’re a wildly varied country, and no one should have to see “in god we trust” or swear to god, if that doesn’t follow their own personal beliefs. What purpose do these things serve anyway? All they do is promote the false belief that we’re a Christian nation. They insult everyone who doesn’t follow a certain belief system. To me, having god forced into so many parts of our society is just a power play, a way for religious people to hold down and disrespect anyone who’s not like them.

I fully support the ongoing mission to remove god from money, oaths, the pledge, and really anywhere that people of varying faiths will have to interact. We aren’t a single-religion country, and unless good people stay silent, we never will be. People have been leaving Judeo-Christian religions in droves, and it says a lot about where the country is headed. The right would have you believe that it’s our society falling apart, but in reality, it’s a sign of our society coming together, learning to respect and care for one another, instead of forcing a single belief system on people who simply don’t want it. 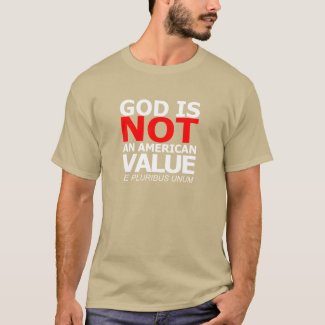 In God We Don’t Trust T-Shirt – by USAtheist