Holy Sh*t! Am I A Satanist? - Briana Blair - BrianaDragon

Holy Sh*t! Am I A Satanist? Yeah, here’s that bomb I mentioned dropping in my last Patreon post, and glazed past a couple blog posts ago. Not only did I give up on gods, I think I might actually be a modern Satanist. It’s funny and perfect and scary all at the same time.

I’m not sure exactly how it happened. A friend shared something and I clicked on a link, and suddenly I’m watching this video about the Satanic Temple fighting for abortion rights:

I was very interested in this group. I looked at more videos about The Satanic Temple and Lucien Greaves. I read several articles. I realized right away that these people were doing some great work. I felt instantly attracted to what they were doing. It felt seriously weird to be identifying with Satanists though.

You see, there are a few different kinds of Satanists. You have old-school Anton LaVey type Satanists, who actually worship Satan and have rituals and magick and all that jazz. Then you have the Satanic Temple style Satanists, who use Satan as a symbol and a metaphor, but they’re atheists and activists. I tried getting involved with the former on more than one occasion. The first “religion” I ever tried to join was Satanism, way back in my teens. I was told it wasn’t for me, and I didn’t get in. Over the years when my belief in Paganism was at a low point, I would re-explore the idea of Satanism.

LaVey style Satanism never really appealed to me though. It seemed kind of vulgar, it just wasn’t my scene. Now, I met plenty of Satanists that were amazing people, and I had a pretty good opinion of them overall. I met a few who were perverted sleazebags too, but I met more that were good, so even though I didn’t want to be one of them, I had a pretty good feeling about them overall, and was more than happy to defend them when I saw them getting maligned online. I didn’t know, until very recently, that this atheist brand of Satanism even existed.

Once I started looking into it, it seemed very much my kind of thing. I’m not really into the full-on black metal goth look, but that doesn’t seem to be a requirement, it’s just common. Their ideals and what they fight for though, I’m fully into that. They fight for women, children, freedom, equality and pretty much everything that a good person would fight for. Take a look at one of their newsletters, and you’ll get a good idea of what they stand for.

Even though I explored Satanism several times, I never thought I’d become one. I’m still not sure I’m ready to become a card-carrying member of TST, but I’m really thinking about it. They stand for all the right things, and their Seven Tenets are pretty much how I live my life anyway. I know that identifying as a Satanist could make a lot of people run from me screaming, but if that happens, so be it. I am what I am, and if that means I become an atheist Satanist, such is life.

I do like the idea that I might be able to become part of a community of like-minded people. I’d love to have folks to talk to who think the way I do. Of course, I’ve always been on the fringe of the fringe, regardless of what I appeared to be on the outside, so I don’t know if I can ever really fit in. I’m looking into it though. We’ll see what happens. What I do know is that I like what I’m seeing so far.

One of the things that fits best about modern Satanism is that they consider themselves to be opposers, fighters. They’re standing up against the injustices of the world. To them, Satan is just a symbol of opposition to the patriarchy and to oppression. I’m all for that. Before I got sidetracked down the road of compliance-to-make-money, I wrote about things that mattered. I tried to make people think. I tried to change the world one mind at a time. I may not be able to get out there and do in-person activist stuff, but that doesn’t mean I can’t contribute. I used to, and I loved it. Sure, it made for a hard life, and I pissed a lot of people off, but I always felt that it was worth it.

So, I don’t know if I’ll become a full-fledged TST Satanist or not, but chances are good that it could happen. No matter what choice I make in regards to that, I’m going to go back to being the real me. I’m going to go back to writing what matters and trying to change the world in my own small ways. That’s pretty rebellious, pretty Satanic, but it’s also just the right damned thing to do. We’ve all been quiet for too long. It’s way past time for all of us to get up and start putting our truth out there the way those who’d hold us down have been doing for centuries. 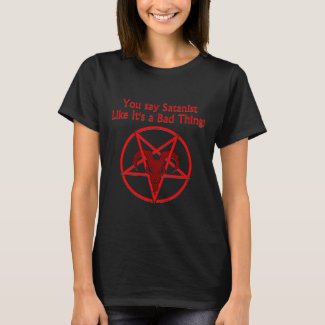