I understand that the suffering of animals is a big deal to a lot of people, as it should be. Factory farming can be pretty gruesome. Most people really don’t want animals to suffer, and it hurts our hearts to know that it’s happening. The thing is, we’re omnivores, and we like meat. I understand that you want less animal suffering, but trying to force everyone to go vegan is never going to work out the way its supporters want it to.

I saw an atheist YouTuber who said that anyone who wasn’t vegan was basically evil. (Sorry I can’t remember who he was.) He said that no one with a conscience could eat meat, and that if you disapproved of people beating puppies, then you were a hypocrite for eating meat. I think that’s a pretty extreme view, and it’s one that’s serving to push people away from veganism, not toward it. It’s basic human psychology that the more you make something seem taboo or bad, the more people are going to want to do it. Just look at the crazy meat-centric diet fads that have popped up as a pushback to militant vegans, and you’ll see what I’m talking about.

I understand that animal cruelty is something that folks really want to put an end to. Unfortunately, it’s highly unlikely that you’re ever going to get the world population, or even the population of your particular country, to go completely vegan. We’ve developed the ability to eat meat, and we enjoy it. Humans have been hunting for and consuming meat for millennia. It’s become a big part of who we are. No amount of guilt-tripping is going to change that, and contrary to what some might think, guilting people into change isn’t a very effective tactic.

It baffles me, and feels hurtful, that anyone would consider those who eat meat to be evil. Are you saying that every native person, every tribal culture, is evil because they eat meat? Does it make a difference to you if they hunt for their food rather than relying on factory farming? The blanket statements some vegans make, make it sound like they just hate everyone who won’t stop putting meat in their mouth. That kind of hatred isn’t going to solve the underlying problem of animal cruelty in the food industry.

If you want to be vegan or vegetarian, no one’s stopping you. Do what you feel is right for your life. Just don’t use guilt to try to force others to conform to your viewpoint. If you want to, provide facts that support your belief. Show research from unbiased sources that tells people why being a vegan is good for you. (Sorry, linking to pro-vegan sites doesn’t count.) Tell people about your personal experience and see if that sways anyone. Encourage taking small steps toward a lower-meat diet.  Just stop trying to force it on people.

One thing that could be done, and I believe should be done, is for all of us to fight to change the way animals are handled in the food industry. We can make our voices heard and work toward providing a better quality of life for food animals. They don’t have to suffer as much as they do. There’s no doubt that it would cost more, and that’ll be something companies will rail against, but with enough public outcry, we could force them to change their methods to allow animals a better quality of life.

Since converting the world to veganism is unrealistic, our time may be better spent trying to change the industry, instead of trying to change each other. Even if mass conversion away from meat was possible, it would take decades or more to make it happen. In the meantime, animals would keep suffering. If we switched our focus to the factory farming problem, we could probably make noticeable change in a shorter time period, and make the world a better place for humans and animals alike.

If you’d like more information on how you can help change factory farming, the ASPCA has a page about Farm Animal Welfare that has a lot of great information and resources. You can sign up for Shop With Your Heart, which will help you make informed shopping decisions and guide you toward supporting farms that care about the welfare of their animals. Finding and signing petitions on a site like Change.org, that are trying to change laws and practices to improve animal welfare, are also a great way to work toward change. You can also research which companies have the best conditions for their animals, and buy your products from them as often as possible,  instead of companies that are best known for their cruelty.

You don’t have to be a vegan to be part of the fight to end animal cruelty. You don’t need to attack people or use guilt tactics to start making the world a better place. There’s more than one way to get to the goal we all want, which is a world where we can eat the diet that’s right for our bodies, without being part of a system that inflicts so much harm on animals. 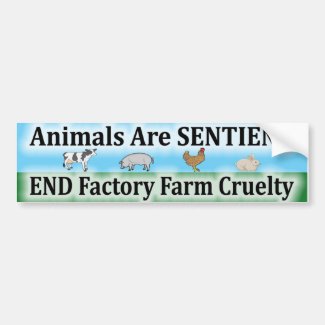