Finally Giving Up On God - How I Gave Up God Pt. 2 - Briana Blair - BrianaDragon Creations

Finally Giving Up On God – How I Gave Up God Pt. 2 So, 2020. The year of every crazy damn thing you can imagine. The year when a big, fat spotlight got pointed at all the ugly of the world, and people, at least the smart ones, started to see the truth. We’ve all started to see things differently this year, and in some cases, the change in how we look at the world has been profound.

For me, as you can figure by the title, the big thing was giving up on deities. Finally admitting to myself that I didn’t believe in god. Any god. Not just the Big Guy that they believe in, but my precious Greek deities. Any deities. All of them. I’m done. Fini. Terminado. I’ve got to say, unless you’ve come to this point yourself, you have no idea how gut-wrenching it is. It made me cry and I almost threw up. But it was a long time coming.

I’m having a hard time with it. I feel like I’m finally seeing reality, but it’s painful as hell. I’m… an atheist. I hate that term. I don’t want to use it. I’m someone who doesn’t believe in gods, but I’m not one of them. I know what you’re thinking: “Um, that’s what atheist means, dumbass.” But labels matter. In my experience, people who identify as atheist tend to be elitist assholes who think that they’re better than other people because they don’t believe in god. I don’t feel that way. I don’t think that either belief, or lack thereof, make you better or worse than someone else. It’s like being blonde or brunette, liking beer or wine. It’s not the kind of thing that can make you superior or inferior. It’s your actions as a person that make you better or worse, more or less, not your religion. Unfortunately, atheists seem to feel their lack of belief makes them smarter and wiser. I don’t like the connotation that comes with that word.

What’s harder than identifying with the term “atheist” is the feeling that I’m a fraud. I have to wonder if other people who gave up god and religion felt this way in the beginning. I mean, I spent a quarter century identifying as Pagan. I wrote pagan books. I ran a Pagan blog. I made Pagan and witchcraft supplies. I was Pagan. That was a core part of my identity. I lived it, and encouraged others to live it too. Everything I did was framed from a Pagan viewpoint. Now that’s not who I am anymore, and I feel like I’ve been living a lie, promoting a lie, and it makes me kind of sick.

I’m trying to convince myself that I’m not a bad person, and that I haven’t done anything wrong. People learn and change. It doesn’t make me bad that I felt one way then, and feel another way now. At least I hope that’s true. I’d love to know how other people who have given up god deal with things like this. How can you feel like you’re not a bad person who spread lies your whole life?

What’s really tough right now is that I based my business on my Paganism. It was integrated into everything. What do I do now? I thought I could still be a witch, but I’m even having trouble with that. It’s even more unsettling that I’ve started to really identify with The Satanic Temple’s brand of modern Satanism. (I’ll get into that later on.) It makes it hard for me to know how to move forward not just as a person, but in my business life.

I realize now that I’ve kind of sidetracked, and you probably want to know why 2020 finally did it for me. Well, it’s probably no surprise that it was, in a round-about way, because of Donald Trump. Trump has shown us all what’s wrong with the world. He’s a joke of a human being, but a dangerous joke. The kind that’s ruining this country. He, alone, wouldn’t be that big of a deal, but his followers, they’re the really dangerous ones. His followers are mostly Evangelical Christians, or at least claim to be. If there was ever an argument against God, there it is. When you think about the kind of god that would allow, or be followed by, hateful, bigoted, evil, disease-spreading morons, it’s not something you want to be involved with.

Now, I’d long ago pushed away the idea of the Abrahamic god. That guy was horrible. He was the epitome of narcissism, contradiction, and needless horror. I hated him. I thought my gods were different. I’m not sure why anymore, but I did. I thought they were better. Kinder. More connected to humanity. But when I looked harder, I realized that every single god is flawed. They all have such weak human qualities. They want attention, sex, vengeance, they expect you to be good to them no matter what, in the hopes they’ll drop you some scraps of goodness, even when they treat you like shit.

Most Pagans probably don’t see their gods as flawed. I didn’t see it myself for a long time. But it always bothered me that they didn’t have the kind of qualities I’d expect from a being worthy of my worship and love. I always thought god should be above human pettiness. They shouldn’t have human needs. They should be fair and impartial. They should seek only for the betterment of mankind and the earth. None of them are really like that though. The Abrahamic god is, without doubt, the most messed up of the grand cosmic lot, but not one deity I know of is without a distinctly human, flawed quality. I can’t follow someone who’s no better than me just because they have superpowers.

And how about those powers? How real are they? Why are they so infrequently used to help us, and so often used to punish us? And if they want us to be better, why punish us so much? So that we can learn? Ha! I’m going to tear that little idea apart at another time. It really seems like the gods like messing with us. More often than not, godly powers are used for punishing and smiting, and too infrequently to help. What’s more, a lot of that supposed help could easily be coincidence or luck.

Gods expect so much of us and give so little. And really, look at the world. How could anything that cares about humanity let things get the way they are? If there’s one god, it’s an asshole who likes watching the little human playthings dance and scream as it tears the world asunder, while blaming some dark force that it created and allows to exist. If there are many gods, obviously we’re in the middle of some kind of contest of wills, and just suffering the consequences. They’re not cooperating or putting us first, and things have gotten ugly. It’s just impossible for me to believe that any higher power, anything worthy of worship and love, could allow the world to become what it has. I can’t love something that allows or encourages suffering. I can’t believe that something sentient is out there and it’s not doing anything.

Of course, that leads to a whole lot of sub-thoughts, like why god would allow suffering, how evil and god can exist together, and so much more. It’s too much to go into all at once. Suffice it to say that this year, seeing what people do in the name of god, experiencing my own suffering, and seeing the state of the world just finally did it for me. I couldn’t pretend to believe anymore. As much as I would love to think that there is even one being out there that cares and wants me, and others, to live well and be happy, I just can’t do it anymore. 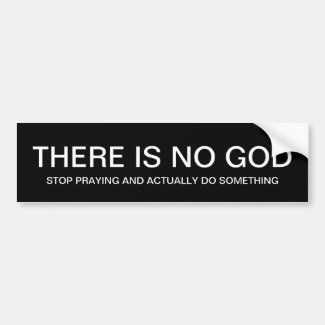 There is No God Bumper Sticker – by infinitree