Children Should Receive Facts In School, Not Religion Have you noticed that the Right has been pushing to have the bible taught in schools, but at the same time, they’re fighting against facts in schools? Well, there’s a reason for that. If they can force religious teaching instead of fact-based education, they can maintain control over people’s behavior. If children are exposed to facts and critical thinking skills, there’s a good chance they’re not going to turn to religion for answers.

Religion isn’t all bad, in the sense that it gives people a sense of belonging, comforting rituals, and something they can identify with so they don’t feel alone. It becomes a problem when people turn to their religion for answers, and ignore facts and science. That’s become a huge problem in our society. People are ignoring, or flat out denying facts, in favor of the mythology provided by their religion.

All you have to do is look at the Covid-19 problem and Trump’s conspiracy loving followers, and you can see how favoring religion over facts is dangerous. The Covid epidemic is a particularly glaring example, as people refuse to listen to science and wear masks, and people on their deathbed insist they don’t have the disease, that it’s a hoax. They’d rather believe that the problem can be solved through prayer, and that their deity will save them. They actually see science as something that takes away their freedom. It’s a pretty sad state of affairs.

When people are more educated, they’re less likely to believe in these sorts of things. They’re more likely to follow science and do what’s right for themselves, others, and the environment. When people have critical thinking skills, they don’t get sucked into myth and superstition as easily, and they look for real answers. That’s a big threat to religion. Religions need followers, they need people to believe, but if they can think and reason, they’re much less likely to follow that path.

Another reason for good education is that those who understand the past are less likely to repeat it. If children are taught the truth about what’s happened in the history of their country and society, they’ll understand what things shouldn’t be repeated. Unfortunately, the Right is trying to whitewash our history, removing any mentions of racism, inequality, and covering up the countless times that religion has spread hate and caused vast numbers of deaths. They’d rather have children believe their mythology, than allow them to understand the truth and work toward positive change.

It’s also well documented that abstinence-only teachings, as requested by religion, don’t work. Children need to understand their bodies, their sexuality, and how to have safe, loving relations with one another. If left to religion, kids would only learn to deny their urges until marriage, and never understand sexuality, gender identity, contraception, disease prevention, or anything else that helps a child to grow up with a healthy understanding of sex and sexuality.

Religion would rather teach kids to be unquestioning followers of a sky deity than think for themselves. We have to do whatever it takes to ensure that public schools have no religious content, other than that which pertains to factual history. Children deserve to learn facts and life skills, and be taught how to think critically and reasonably. They should be provided an unbiased, scientifically accurate education, so that they can choose for themselves what they want to believe.

Removing religion from schools terrifies the Right, but most other religions are content to keep their beliefs in the home and church, as it should be. By separating faith from fact, we give children the ability to make their own choices, free from indoctrination. Educated people have the ability to make better choices about their bodies, their relationships, their beliefs, and every other part of their lives. If we educate children with information that’s accurate and unbiased, we set them up to have a better future. Every child deserves to go out into the world knowing actual truth, so they can decide on their own if they want to accept a particular mythology or not. 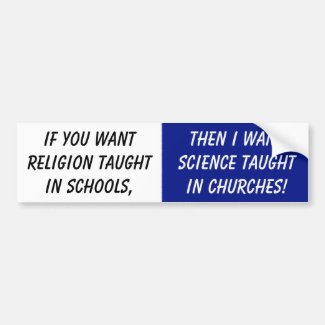