I honestly can’t even believe this is a thing. I suppose I shouldn’t be so surprised, Americans are going completely crazy these days. So, here’s the thing, and brace yourself for this one… There’s a conspiracy theory going around about the metric system, and how America needs to hold on to it to maintain their power. It’s nuts, and unsurprisingly, something believed by Evangelicals and promoted by the ever-insane Tucker Carlson.

According to Fox News host Tucker Carlson, the metric system is part of a new world order plot. That’s right, this measuring system, which has been adopted by every part of the world except us, Liberia and Myanmar, is part of an evil plot, and good Americans need to stop it. I guess it would just be wrong to measure what is obviously a flat Earth with anything less ridiculous than our current, confusing measurement system.

James Pinero, a guest on Carlson’s show who advocates against the metric system, calls the metric system “the original system of global revolution and new world orders.” He believes that the imperial system is better because it’s based on things we can understand like our physical feet and other body parts. Nevermind the fact that it’s confusing and difficult and refusing it keeps us from making some meaningful connections to the rest of the world. Radicals use this stuff, so “good” people need to stay away from it.

I don’t know, I suppose they think Satan’s going to drag us all to hell if we accept the convenience and accuracy of millimetres or something. It’s hard to tell with these people. Carlson calls metric measurement “creepy.” How the hell does that even make sense? This is just one more way that Evangelicals have gone around the bend and are becoming a danger to society. They don’t even want a unified form of measurement across the world, because imperial is the old way and old must mean better. They want everything to go back to the dark ages, I swear.

It seems like the Right is quick to vilify anything that’s new, anything that has origins they don’t like (usually for some absurd reason), or anything scientifically valid. They seem to want to keep people confused and just send us backwards instead of forwards. Just look at what they want for society, and you can get a good idea of their overall views.

America is kind of a mess because it’s constantly clinging to antiquated things and thoughts that the rest of the world has let go of, or soon will get rid of. We’re still clinging to the standard measurement system, holding on to Daylight Saving Time, believing in archaic ideas of modesty, gender identity and countless other things. We’re starting to fall behind the rest of the world because one group of mythology-loving crackpots don’t want to get with the times.

It’s very important, more now than ever, to educate people and get them to let go of conspiracies, fallacies and general nonsense. There’s no legitimate reason to fight the knowledge that the metric system is convenient or that the Earth is a globe, or that the environment is in danger because of humans. It seems that people, especially right-leaning ones, are just trying to argue against every single thing that will move us forward into a better, more productive, more inclusive world. If it challenges their stranglehold on society, they’re going to fight it, even if it means making up ridiculous lies and conspiracies. 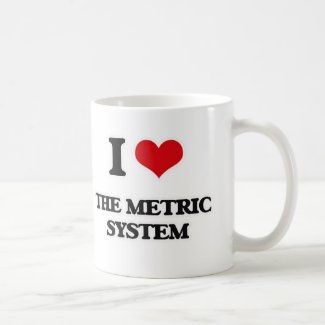 I Love The Metric System Coffee Mug – by ilovegiftshirts