2020’s been rough on a lot of people. I’m no exception. I had to survive psychological abuse, health problems, peri-menopause, taking care of a relative with late-stage dementia, and a crisis of faith, among other things. The crisis of faith is what I want to talk about here. In 2020, I stopped believing in gods.

Now, truth be told, I’ve struggled with the idea of deity my whole life. At a very young age, I knew that “God” in the Abrahamic, monotheistic sense, wasn’t for me. I’d seen enough to have a strong belief that their god was not something I could believe in or follow. He seemed like a complete ass, and nothing about Christianity made sense to me. So, like many others, I became Pagan.

When I was about 15, I tried joining a group of Satanists, but they flatly informed me that it wasn’t my path. (Though I did try coming back to it several times over the years.) They watched over me and kept me from getting my nerdy little ass kicked by the school bullies, but they wouldn’t make me one of their own. I was upset, since I figured, in my youthful ignorance, that if I wasn’t a Christian, then I had to be the opposite, which was a Satanist. I’ve learned a lot since then, but at the time that made sense, and being excluded hurt.

A couple years later, after watching The Craft, I started looking into witchcraft, and discovered Wicca. I was enraptured. It seemed like a perfect path. Female-centric, loving, accepting, filled with wonder and magick. I found a Hotmail group called The Village of Lothlorien, met a lovely Wiccan High Priestess named Kestrel, and began my journey. I completed my year-and-a-day training, and was officially dubbed a Wiccan.

I followed the path of Wicca for many years. I’d been thoroughly taken with the Greek pantheon since I discovered them in my 4th grade Talented and Gifted class, so they’re who I followed. I learned their names, their stories, and I communed with many of them. I called on Aphrodite when I needed love, Nemesis when I wanted vengeance, Asclepius and Hygieia when I needed healing, and I credited the Muses for everything I wrote, painted or sculpted. I fully believed that they were real, and that they were always there for me. Sort of.

You see, when my life took a turn for the worst, when I found my first husband to be abusive and a criminal, when I lost a baby and my health turned sour, I started to question. Where were they? Why didn’t they answer my prayers? Why wouldn’t they help me? I wondered if they were even there. I was angry with them. I was angry with myself too, because from what I’d been taught, if the gods weren’t there for me, it meant I hadn’t pleased them. My suffering was my own failure.

Like any good believer, I tried to pretend that my suffering was some sort of lesson, and I petitioned the gods to come back to me and help me through. And of course, when things improved, I gave them all the credit. They were the ones who had led me to where I needed to be and given me the strength and wisdom to get through. That’s what believers do, we do all the work and give imaginary people all the credit.

As the years passed, I had a lot of hardships. I’m one of those people who has the kind of life that’s filled with so many bad experiences that you wouldn’t believe me if I told you. You’d think “No one can have luck that bad!”  I’ve been through more hell than anyone should have to endure. Of course, I tried to use my faith to get me through. Over time though, it kept getting harder. It got more and more difficult to believe that there was a reason for all my suffering. It got harder to believe that there was learning to be done. It got harder to pray, give thanks, and worship deities that I felt were either failing me, or punishing me for some unknown transgressions.

I did my best to stay on the path. Admittedly, my connection to the gods got weaker over time. I loved the idea of them, but in practice, it wasn’t satisfying. I didn’t want to give up though. The idea of being an atheist sickened me. I couldn’t go there. So, I looked into other paths. I expanded who I was, spiritually. I gave up Wicca after about 6 years, and identified as an “eclectic Pagan.” I never worshiped any other gods, but I started, bit by bit, practicing magick without them.

I think that in reality, I was always a witch, but the Pagan part was perpetually in question. One definition calls a Pagan “an adherent of a polytheistic religion” but I wasn’t really adhering to much. I didn’t support monotheism, but I kept having trouble with the whole god concept. Another definition is “a member of a religious, spiritual, or cultural community based on the worship of nature or the earth; a neopagan.” I respected and loved nature, but I wouldn’t say I ever worshiped it. I’ve always been an odd one and I suppose where I stood in regards to religion was just par for the course.

At any rate, as the years went by, I kept having trouble with gods. It kept nagging at my brain that the whole human-god dynamic was messed up. Okay, so they’re super beings, and they can do stuff for us, so we have to get on their good side if we want them to do it. But they’re all kind of petty, narcissistic, and just as screwed up as humans. How much they seem like humans always bothered me. If gods are so great, why aren’t they above all the human crap? What aren’t they enlightened and awesome? Why are they screwing and fighting and smiting and so damned needy? Whatever issues I had though, I always went back to trying to force the gods into my life, and trying to love them and believe they were there for me.

In 2009 my life took a really bad turn. Not in any traditional sense, though. I got introduced to The Secret. Now, at the time, I thought that was amazing. After three years of ruining my brain and my life with it though, I realized that it was a toxic, dangerous system that I needed to wipe from my memory. I absolutely believe that you should avoid The Secret and it’s brand of the Law of Attraction like your life depends on it, but that’s a topic for another time. The reason that it matters here is because The LOA led me to believe that I create reality, and I choose what happens in my life, and it made gods seem pretty worthless. Who needs a god when you can do it all yourself?

When I purged the LOA from my life, I tried to go back to my Pagan path, but it wasn’t the same. My magick and my faith were in disarray. The LOA will mess up your head anyway, but this was different. It made me really question what the gods were, why they mattered, and if they were something I needed in my life. This wasn’t easy for me. I suppose it’s never easy for anyone who does it.

Fast forward a few years and I’d had good times and bad. I’d had faith, lost it, and kind of found it again. In 2015 I moved to Texas, and thus began some of the hardest years of my life, as I mentioned in the first paragraph. Life got ugly. At a time when I needed faith to soothe me, and my gods to help me, there was nothing. I felt utterly alone. I did spells, meditated, cried and begged, but my life devolved into chaos and pain, and I was alone. There was no higher power to comfort or save me. There was nothing.

What’s odd is that it wasn’t enough to make me quit on deity. Not yet. Years of questioning, years of a weird love/hate relationship, years of my heart not being in it and all evidence telling me that gods were bullshit, but I didn’t give up. I couldn’t give up. Then 2020 came, and something snapped. Something changed. Now, after everything, I’m ready to say that I don’t believe in deities of any kind anymore. 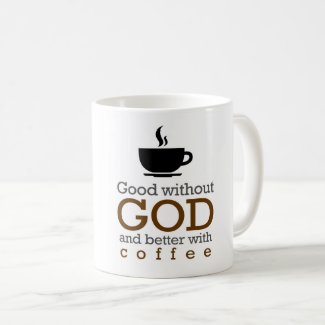 Good Without God And Better With Coffee Mug – by Atheist_Fun_Salad